Why Do Center Channel Speakers Look Like They Do?

Center channel speakers have a different look to them for a few reasons. It all began way back in the late 80’s when Dolby began licensing their surround sound for home use in the form of ‘Dolby Pro Logic.’ That was when surround sound went mainstream. VCR tape rentals were well under way and the consumer electronics industry was all abuzz with this new toy.

Back then, Dolby proposed a system of speakers that would roughly replicate the experience of a movie theater right in your living room. It would be 4 channels of surround, front left, front center, front right and a shared mono rear channel divided into two speakers for the back left and right. Some had a subwoofer channel, but most used the front speakers as big ole’ floor standing speakers. It’s noteworthy that during this time, Bose was just starting their revolution of subwoofer and satellite systems. 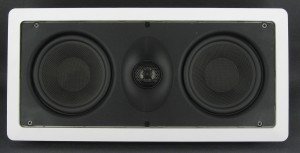 So Dolby made center channel speakers for our odd-shaped living/family rooms. There was only one sweet spot for listening in the middle of the sofa in the middle of the room. What about little Joey who had to sit on the other couch on the side of the room right in front of that big ole’ floor speaker? The whole movie would sound like it was coming from that one speaker.

Then came the idea about the center channel speaker. It was to broadcast the dialog of the movie track. All the action and things that happened on screen now would sound like they came from the screen and Joey could enjoy the movie from his odd sitting place.

Center channel speakers had to go on top of the TV. The consumer electronics industry knew that another big ole’ speaker on top of the TV wouldn’t work, so they made the speaker longer and with a lower profile by putting 2 smaller woofers instead of one larger one on the same plane in the same box. Now they could get the sound of a 6 1/2″ woofer out of two 4″ speakers by wiring them together and combining their effective surface areas.

So we all had TVs in the living room and they were getting bigger and bigger. But most of us still had a tube style TV 35″ or under. Putting a speaker on a tube type TV is a problem. Tube type TV’s have a permanent layer of phosphor just behind the glass on the screen that is affected by magnetic fields (the back of a speaker generally has a large magnet). The industry took care of this problem by putting a metal shield around each of the magnets in the speaker array and voila`: center channel speakers are born.

Flip forward in time to present day electronics. We have improved our theaters greatly. We now have big screens that are not made from phosphor but from exotic materials like plasma, LCD, rear projection CRT and front projectors. The beauty of these new technologies is that none are affected by magnetic fields. Also, most of these are designed to be very thin in depth.

The new surround technologies from Dolby and other brands still employ the same basic array of speakers surrounding you, but now all the speaker locations have discrete or dedicated channels with the full spectrum of audio (lows to highs) coming from each location. Movie producers know this and can use these channels in any way they like to enhance their movie’s presence in your theater.