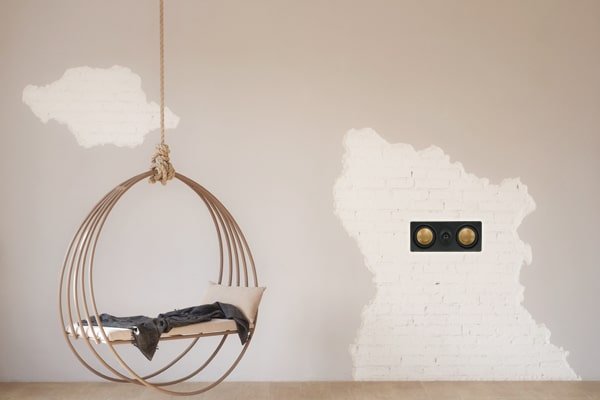 In 1987, Pro-Logic, a breakthrough technology for surround sound processing, was introduced.  Inside it, a sound decoder breaks down sound into the different components making up the surround sound set up. That’s to the left speaker, the right speaker, and the center speaker. This is done through the use of a single-frequency range. Such innovation was timely as at that time, home theater systems were popular.

Dual woofer speakers got their humble beginnings when Dolby got into the home surround sound movement. There were two big things about this surround sound. First was that speakers are placed behind where an individual positions himself or herself in order to create that theater environment where sounds whizzed by and over and around you. Second was the center channel.

The dual woofer center channel was key to making things sound realistic.  The idea was to put a speaker on top of the TV (which were as giant as 35″ tube style).  Dolby wanted the speaker on the TV so that sounds that were on the screen came from the screen.  This was important for home situations because at the time we had living rooms and family rooms that had irregular seating as it pertained to theater. With a unstructured set up in the home, a typical speaker won’t be able to do the job.

So with little innovation and creativity, the center channel was born.  So now, we have these bookshelf-sized speakers with 6 1/2″ woofers on the left and right, a center channel speaker with dual 4″ drivers in the middle, and all the front speakers that sounded very similar to each other in performance.

Fast forward to around 1995, Digital Dolby for Home Theater usage  was introduced. Sales were going crazy for home theater and it was the best system yet.  With such a demand, marketing skyrocketed and an important change happened: all the channels became discrete. Meaning, each channel was not only controlled independently from the others; they were all full range.  In the days of Pro-Logic, the center channel and rear speakers were only partial range in terms of frequency response.  Now there were reasons to sell a better center channel and surround speakers to the early adopters who were in on the Pro-Logic craze.  But then, things got out of hand.

Sales people started to market that center channel speakers are the most important speakers. You can reference this thread from the Home Theater Magazine forum. As it mentions with a reasonable discussion, it’s far more important to have the center channel be from the same brand of speakers for timbre matching as opposed to being some brute of a speaker.  But the marketing damage was done.  Today, the ‘most important speaker’ still resonates in the marketing world.

The thing is that these massive dual woofer center speakers are impressive but only if they’re set up in following the recommended positions. So if you really want an impressive theater experience, the way to go is to get more surface area on the walls called speaker boxes.  It’s through this recommended setup that the term LCR speaker was born.

LCR stands for Left, Center, or Right. In the Inwall Store language, it’s called LCRR with the last R meaning ‘Rear.’ An LCR type system is the most impactful type of arrangement you can get without going with a more complicated multi-amp set up. Why? Because there are two drivers on the same speaker plate.  Remember back in the Pro-Logic days when they wanted to push the same amount of acoustic air power out of the center dual woofer speaker to match up with the left/rights?  Now you’ve got these massive LCR styles which have mostly 5 1/4″ woofers in them. Add them up and you’ve got almost an 8″ driver’s worth of acoustic power coming at you but at the distinct advantage of them having less mass, thereby being able to move faster than a single 8″ driver.  This is significant!

The added bonus for inwall drivers is that because they’re mounted in the wall (compressed chalk), they produce accurate sounds above about 80-100 Hz.  But don’t expect your wall speakers to produce sub woofer frequencies. Subwoofers are there a reason.  What you get is really fast dynamic mid bass response all the way around the sound stage.  It makes for an entertaining audio experience.  It also has the potential to drive dog owners crazy. It’s really lifelike when the door bell rings!

If you want to experience surround sound, you can check these LCR products in our store: